April 21, 2006, 11:38 AM2006, news, results, updatesPermalink
The nice folks over at Bangor Parks & Recreation have informed me that the 2006 race results will be available online within a week from today. That's good news.

Here are some preliminary results which were made available just after the race: 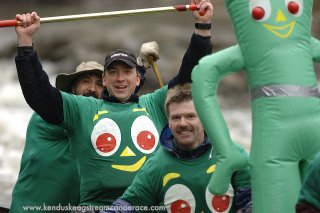 Gumby Crew: Right back at ya with the love.

Holy cow - what a demanding photo shoot it was today! Lots of fun. Although I didn't paddle, I got just as wet as many of the people who did. So much for staying dry on the bank of the stream.

By the way, I didn't shoot at Six Mile Falls this year. This time around I chose the Shopping Cart rapids closer to Bangor.

There were 339 boats this year (258 of which finished the race) and I think I snapped just about all of them. If you do not appear in the galleries, it isn't because I didn't like you. It's because a paddle or another person (or both) got in the way of me seeing your face. Blame my wet, cold shutter finger and the overall timing of things if you must.

If you did the race today, I tip my hat to you.

And to Dirigo Rescue: The Shopping Cart crew did a heck of a job ensuring a safe and fun race for all. Just thought you might want to know. They also provided this humble photographer with helpful radio updates during the race. They didn't have to do this, but they did. And I appreciate it.

Kenduskeag Is A Go

The race is on!

Race day registration has been scaled down to one hour, from 6:30am to 7:30am.

So if you plan to register at the last moment tomorrow, better get there early.

April 11, 2006, 05:48 PM2006, coverage, media, news, updatesPermalink
WABI-TV, the CBS affiliate which usually broadcasts the action from the bridge overlooking Six Mile Falls, will not be televising the race this year. 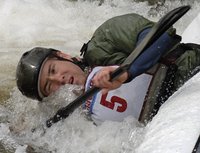 April 04, 2006, 07:02 PM2006, stream reports, water levels, weatherPermalink
Rain, sleet & snow today. I couldn't be happier. People in town are giving me strange looks when I tell them how great it is that we're having this weather. We need all the water we can get for April 15th.

UPDATE 4/5/06: I went by Six Mile Falls today. The stream was noticeably higher than it was just a few days ago. The rain and snow seemed to help things a bit. Given a few more days like that, I would think that we'll be good to go!

If you were part of the Gumby race crew last year, you will find your smiling faces...well, not on the cover of the Rolling Stone, but at least in the pages of the April issue of Bangor Metro magazine. It's in stores now.

College Students: Compete For Your School! 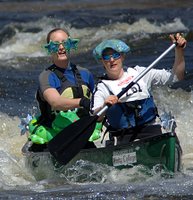 College students may compete on behalf of their respective schools for the ultimate prize: The College Cup.

You must be a member of MaCKRO (Maine Canoe & Kayak Racing Association) to compete in the College Division. There are special membership group rates available for colleges. Contact MaCKRO for more information.

"Only one, Unity College, has contacted me about their club joining. They did make some comment about the other colleges around here not knowing how to paddle, having buggy whip arms and that they would probably float down the stream backwards, puking in fear. But the message wasn't real clear."

A Couple of April Fools Scout The Stream

On the morning of April Fools Day, I scouted different parts of the Kenduskeag with my neighbor Chris D'Amico, a seasoned vet of the canoe race. As a paddler, I'm a hopeless novice. I work primarily as a photographer. So it was good to scout some sections of the stream with someone who could actually "interpret" the water. This we did by car and by foot - not by boat.

It doesn't take a seasoned veteran of this canoe race to see that the stream levels are quite a bit lower than in years past. But I felt a need to know just how bad the damage is. Would a seasoned race participant take a look at sections of the stream and abandon all hope? Recent race cancellations in Maine (all due to low water) have some people sitting on pins and needles. Is it possible, they ask me, that the race could be cancelled altogether this year? It is a question which has popped up in the back of my mind as well.

It's important to note that up until now, there has been absolutely no mention of a pending cancellation by the race committee. And today's estimation from Chris was one of cautious optimism: "The stream is low, yes...but it certainly appears to be doable. At least for now. Some sections will be rough going, but it appears to be passable."

I'll have to leave it up to other paddlers to determine whether "passable" is good enough for them. But in any case one thing seems certain: Six Mile Falls looks to be a dicey proposition. With such low water levels, a paddler's options are limited. We walked along both sides of the stream in the area of Six Mile Falls, all the while amazed at how much more exposed the banks of the stream are this year.

Tree stumps, knifelike slices of ledge, spits of grassy land - all of which were submerged under several feet of water last year and in years past - were completely exposed. Stairsteps of rocks and boulders riffled the stream.

Chris lined up some possible approaches to Six Mile Falls and again, he felt that it seemed passable. But tricky. He figured that lining up for a run into the low-level falls may require considerably more technical skill and finesse of paddlers this year. He also wondered if most people might decide to portage the falls altogether to avoid such a problematic obstacle. Then again, there's an outside chance that Six Mile Falls will be designated a mandatory portage.

That about closes it for our April Fools Day stream and race speculation. For whatever it is worth. Stay tuned!

UPDATE 4/5/06: Stream levels have risen in just a few short days thanks to rain, sleet and light snow. Things are looking much better. So, no more hand-wringing! I would be VERY surprised if the race were cancelled at this point. I don't think 2006 will be a year of record race times, but I don't think this race will be cancelled. Just my 2 cents, take it or leave it.