Kudos to anyone who caught the Bob Dylan reference in the title of this blog entry. (Last year it was Creedence Clearwater Revival.) 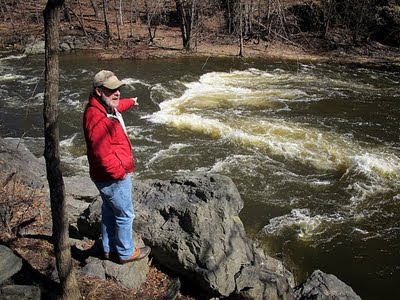 So here we are again, two middle-aged dudes (but young at heart!) taking a stroll along the Kenduskeag Stream ahead of the big race on Saturday.

I'm referring, of course, to myself and my friend Christopher D'Amico, a twenty-year (plus?) veteran of the Kenduskeag Stream Canoe Race. I learn something new every time I see Chris, whether it has to do with paddling or something completely unrelated, and our "stream scouting" (which has become a tradition) is something I look forward to every April.
In the 2010 stream report, which you may check out here, I mentioned that the stream was "bony" and "mellow" and "low" and that the race looked to be "a slog". The Bangor Daily News would go on to characterize that race in much the same way. And for good reason.

The 2010 race really was low and slow. Mind you, people still had a good time on the stream that day, but many were sort of nonplussed to find themselves coloring the rocks of the stream with their red, green, orange and blue watercraft.

I really don't think we are in for a repeat of the 2010 rock garden. Not even close. The water depth at Six Mile Falls (at the time of this writing) is just over 7 feet. Ray Wirth of Water Walker Kayaks reminds me that the stream was around 4.4 feet at this time last year. And it's been raining all day today, so that may only add to the overall stream level come Saturday. We'll see.

The overall flow of the water impressed us this time around too; that could only be said about certain spots along the stream last year; overall it was like molasses. This year the stream has a little more "giddy up and go" to it.

If you are new to these "stream reports", we start closer to town (Bangor) and work our way UPSTREAM. As a paddler, you'll approach these places DOWNSTREAM. So the order is reversed here. Hey, that's how we roll. Don't ask me why.

Let's start with an area invariably referred to as "Shopping Cart" or "Washing Machine" or "Thunder Hole". (That last one is a shout out to my Canadian friends in Nova Scotia and New Brunswick.) 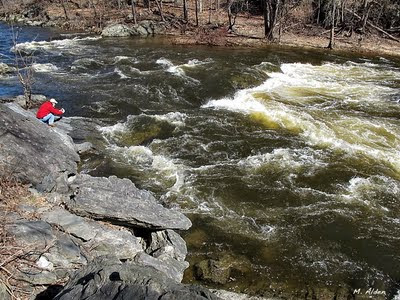 This area had a nice, zippy current and a decent wave train. (I think the name that I came up with for the wave train following the rapids was "The Devil's Tongue".) Keep your paddle in the water here. As longtime paddler Clayton Cole once told me, "you must paddle with AUTHORITY in whitewater." In other words, work that paddle when things get intense! Keep it in the water. Grabbing the gunwales and bracing for the worst while hoping for the best is a normal human reaction. You may have to fight your natural instincts here.

Anyway. It is very common for people to stick to river right and hug the rocks alongside the rapids at this spot, but heck...we think a paddler could actually clear the rapids on river left if the paddler can manage to get over to the left hand side of the stream without being drawn into the middle of the drop. Normally it's too bony on river left to make this sort of move, but if the water levels hold up we imagine it will be doable! 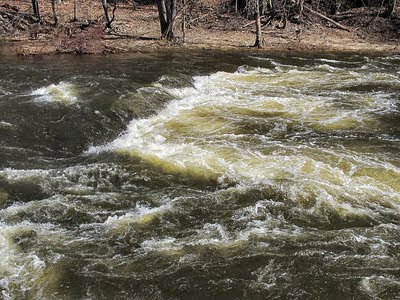 Alrighty - moving further upstream, we come to another spot along the Kenduskeag which often throws paddlers for a loop. There's a good reason for that: a sneaky set of rapids will greet you just after you put in at the (mandatory) Maxfield Mill portage. 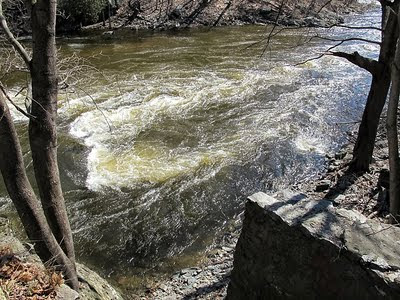 A lot of paddlers have told me that this spot gave them trouble because a) they were tired after all of that paddling and b) they were sort of lulled into a false sense of security after completing the portage, where the water starts off calmly enough. The stream seems so innocent. But not for long, baby!

Because of a rock ledge (think of it as a wall), you are sort of forced to go through a narrow channel and it can be sporty! So be prepared for this little stinger once you've shoved off from the Maxfield portage point. Further downstream you'll run into the Shopping Cart/Washing Machine/Thunder Hole rapids.

Here's a shot of the put-in after the Maxfield Mill portage. Notice how serene it appears? (Lover's Leap is in the backdrop). 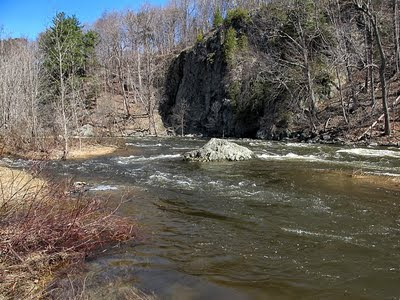 And here's a shot of the Maxfield Mill take out, which looks good. There's a nice big pool-like eddy on river right which will allow paddlers to "park" if there is a queue for the portage.
Sweet. 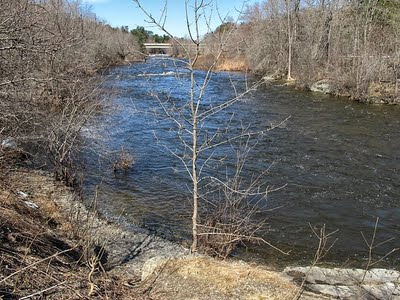 Below is a shot (further upstream along Valley Avenue) of the Flour Mill rapids. Don't worry - this is a mandatory portage and you won't go through this. (Unless you really weren't paying attention while cruising down the stream!) No, this area will be marked and there's usually a person there to make sure you know that it's time to pull out and portage. Just wanted to show you the rapids so you'd have an idea as to the stream level this year: 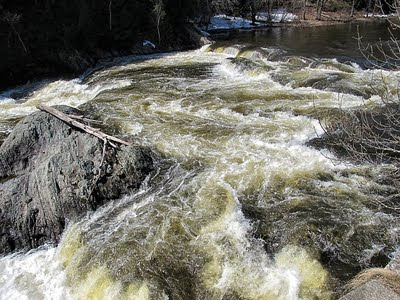 Chris and I met two fun-loving young women at the Flour Mill Dam who are going to do the race for the first time this year. They mentioned that they might have SpongeBob Squarepants as their boat mascot. So if you happen to spot these lovelies somewhere along the Kenduskeag, give them a shout of encouragement!

And I would be remiss if I didn't post yet another shot of the sluice pipe at the Flour Mill Dam. I take a shot of this every year; I suppose it's because of my fascination with the fact that in the earliest years of this race - the late 1960s and early 70s - certain paddlers actually shot through this drainage pipe rather than portage the rapids! They were an adventurous lot. (And no, do not even THINK of attempting this; it's roped off anyway.) 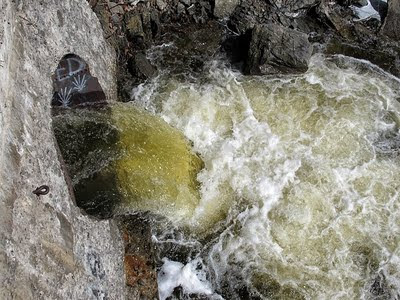 And here is a shot of the take-out area at the Flour Mill. It's mellow here; you shouldn't have any problem pulling into this spot to portage around the Flour Mill area. 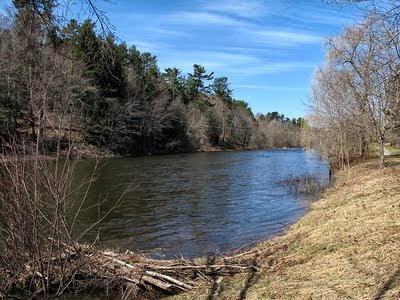 So now we're going to jump up to Six Mile Falls, one of the most notorious spots on the Kenduskeag. This is where a sizeable portion of "river vultures" will gather to see if you can shoot the rapids or go "ass over teakettle". No worries, though. There are LOTS of rescue people at this spot and they do a great job. You will be safe! 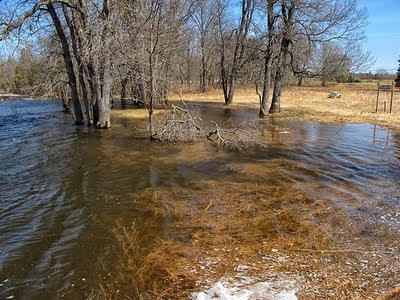 This spot is where many of the river vultures will gather. Note that the "vulture meadow" is a tad flooded this year. Not too bad though - I've seen it worse going both ways.

On the bridge overlooking this scene, WABI TV5 will have their cameras running from 10am to about noon, so if you come through Six Mile Falls within that time frame be sure to smile for the viewing audience! (Dumping at Six Mile Falls will virtually ensure your appearance on television.) 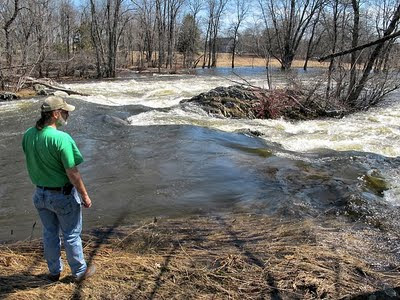 We noticed that there are options when approaching Six Mile Falls. Some years there are more, some years there are less. This year, you can approach from river center or river left. If you are going to shoot the "jaws" (or middle channel) of the rapids, the idea is to line up your boat to ensure a straight shot. You will approach the jaws at an angle. But not too much of an angle or you'll tumble.

This is one of those things which is frustrating for me to describe in words, so I'm going to post a video update to this blog entry on Friday night. Check back at that time to see some examples of how people are shooting Six Mile Falls. The visual demonstration will be much more effective than anything I can write.

And I would strongly encourage you to scout the areas I've touched upon in this blog entry if you have the time. You'll have company - lots of paddlers will be checking things out on Friday afternoon and evening. You might even see me out there.

In conclusion, I thought the rapids looked "peppy" and "sporty" and even the flatwater had a decent current, certainly when compared to last year - and this is something just about everyone will appreciate. And I suppose that summarizes my initial reaction to this stroll along the stream (as well as that of Chris): we think this will be a fun race for just about everyone. Kayakers will have a blast on certain areas in particular.
Here's Chris' take (which he posted on the Kenduskeag Stream Facebook Page):

Mike and I reconned the stream Tuesday, like we always do. The water is just off high water, in my opinion. Pretty quick water, lots of choices to negotiate Six Mile Falls; sluice is wicked powerful; lots of snags, in the sluice and just upstream of the Jaws; no hydraulics at Washing Machine. But, it can change by Saturday. I think people who suffered last year will be pleased this year. Newbies should have lots of encouragement to participate and sacrifice themselves (instead of us) to the River Gods!